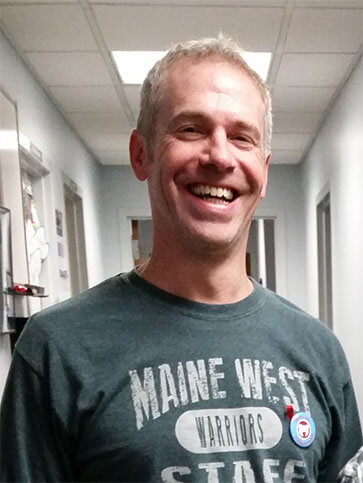 But what was the problem?  I went to work five, maybe six days a week.  I got paid every week, and not badly.  Who was I to complain about a situation that many would love to have the opportunity to find themselves in?  I tried to just stuff the ill feeling I was having down somewhere and to continue doing what I was doing, but it was affecting my disposition.

I completed my Bachelor’s degree in education and after a poorly executed job search from which I was only offered a teacher assistant position, I chose to work for my brother at his body shop as the customer service and sales manager.  I was damn good at it!  I was trustworthy, a good manager, and looked out for both customers and the company.

Over the years though, a feeling kept creeping in.  I wondered what I was missing having not ever worked in education and assisting kids to be their best.  But as time went on, I took on a mortgage and a few years later was fortunate to meet the woman I was meant to marry.  Any kind of occupation change seemed to be more and more far-fetched.  Frankly, I was not sure that teaching was possible or what I really wanted to do and I had no other ideas.

But still those feelings were there.  I did not like what I did with my time every day and there was nowhere for me to go.  Upward movement only meant maybe partnership or perhaps managing multiple locations.  Not for me.  Remaining in the same gig for the next 20 to 30 years?  No thank you…..

So, my wife and I were out west in the summer of 2011 visiting friends and family.  As always happens when seeing folks you don’t see too often, the questions come up.  How is work?  What do you do?  I hated those questions because I was now telling the truth.  I disliked my work and I did not know what I really wanted to do.  As this particular trip was winding down, I had never felt the dread of returning to work as I did at that time.  It was bad, bad enough that my wife and I decided that something needed to be done.

Shortly after we got home I did some career counseling searches which led me to Career Path.  I worked up the courage to reach out and we spoke on the phone.  We agreed to move forward with some career counseling in order to help me understand what was happening and why I was so unhappy with what many would consider a good situation.

This experience helped me to understand that happiness in an occupation does not simply mean you have somewhere to go and they pay you for it.  If you are not working to your strengths and doing something that you feel is important for you, it just does not allow for you to be the best that you can be.  I realized that who I really am did not thrive in that environment doing that work.  I was good at it, but it was not good for me.

In January 2012 at 39 years old, I enrolled in a graduate program.  Later that year my wife and I were blessed with the news that we would have a baby in March of 2013.  So now we decided to push all the chips to the center of the table.  My classes were going well and I felt that the new career was the right move.  I knew that I could not do the required internship without quitting my job and I knew that it would break my brother’s heart when I did.  He was in denial that it would ever happen I think.  But, somehow it all happened.  Three weeks before my daughter was born I worked my last day (just shy of 15 years of service) so that after my wife’s maternity leave was over, I would be home with the baby a few days and also do my internship hours.  As you may probably recognize, this was crazy.  What the heck were we thinking?  But I am here to tell you that things work out like they are supposed to, albeit with a lot of sacrifice and stress.

After earning my Masters of School Counseling degree, I did not find a counseling job the first year out.  But I did get a job as (here it comes again) a teacher’s assistant, working directly for a high school counseling department.  The following summer a counselor decided to not return at my school and I was hired full time as the replacement! Unbelievable!

Having now completed one full year and ready to return for year two, I can say with confidence it all worked out just like I wanted. I get to help young people think about their long term goals and I reflect regularly on what I learned during my counseling sessions in my work with students and parents.  I now love my work!  And my entire existence is better as a result.

In closing, I’ll say that I believe that we are meant to do, with our time, things that are important to us and that help us feel and be our best us.  I believe that the workplace environment must match up to your interests and personality.  If not the case, it is hard to be satisfied and live a happy existence.  It truly is scary to step out of a comfort zone and go for the things that you feel are important.  But I am a living example of how wonderful it can truly be!  And to all you readers, I wish you the best and the fulfillment that you deserve!

View all posts by Donna Sandberg →